It is the evening of February 22nd. I’ll try to catch you up on our antics.

When we got up, Jane insisted that we have to get some exercise. After a night on anchor, I figured that we might need the batteries charged, so we rigged up one of the folding bikes and I let her charge ‘em up.

The kicker was I had to take a turn too, but it was a nice breezy morning and it did me good. (Editor’s note: No batteries were actually harmed or charged during this event)  Just wondering if I can run a bike chain to the prop shaft?

I wasn’t happy with this anchorage for a number of reasons (wind, high voltage lines sparking, and the crab trap, so we moved over to the other side and other end of the Eau Gallie Bridge to a much better location just south of Dragon Point at the mouth of the Banana River. I swear I am not making these names up.  They are real places.

We launched the dinghy in the afternoon and found our way to a public park where they had a bunch of crew shells. I knew we couldn’t land on the crew pier, so we tied to a sign post that said “No Mooring”.  Sometimes, ya just gotta take your chances.  From there we hoofed it about ¾ mile to the Publix for stocking up and due to the load, Ubered back with Gramps.  (Doesn’t Uber have an age limit?)

We were enjoying wine on the fly bridge and I was trying to get some good pictures. After a while I looked back over my shoulder and realized I was missing a great sunset shot.  Jumping up (as one should never do on a boat) I left some shin skin and hair on the corner of the bench seat frame, and grimaced while shutter clicking my way through the pain and beauty. 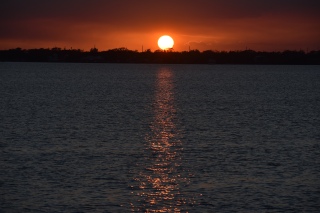 We got up and decided to move on up to Cocoa Village Marina. They had good reviews in Active Captain.  Mike met us on the finger pier of our slip and was excellent in both helping us tie up and giving us the lay of the land.  Getting into the marina was not difficult and we eased into the slip bow first like old hands.  Amazingly, we were berthed next to another boat named Sabbatical.  What are the odds of that? 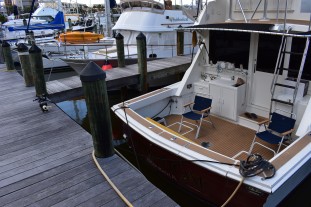 The marina is right by the cutesy part of Cocoa with lots of independent dining options and shops. We met Floyd Tapp and his wife, Elaine on the dock.  He is the author of The Saga of the Sailing Hillbillies. They’re experienced sailors and an interesting couple.  We hope to see them again.  That night we walked over to Ryan’s Pizza and had a fried cauliflower appetizer and a thin crust pizza done just our way (with almost no cheese).  Afterward we walked the village and ended up at Murdock’s Pub  since they had a great band playing an assortment of rock and blues.  On the way back to the boat, we stopped into the Café Margaux for a nightcap and Dragon (from Serbia) concocted a great one for us.

It’s exercise time again, so off we trot for a five miler along the river road. Lots of cool old homes to see as we hoof it down into Rockledge and back.  Breakfast had to wait until after and then we got cleaned up and planned a trip to Publix to restock.  There is one on the east side of the river, so we checked out the bus schedule and thought that would work.  Once we get to the bus stop we realize that it’s going to be 50 minutes before the next bus so Jane summons Uber.  Three minutes later here comes the bus, so we cancel the Uber ($5.00 penalty) and hop on the bus to go over the bridge.  We know that we get the senior citizen discount on the bus so it’s only 75 cents, but, sorry no change given so it’s a $2.00 ride for us to get to Publix.  No two seats together and so I sit down next to Mr. Stinky.  Mr. Stinky proves to be very helpful about where to get off and where to catch a bus for the return trip.  After we get our provisions, my lovely wife thinks it would be a good idea to walk back the two miles to the marina.  It is after all, exercise day.  So, on we truck while I keep a keen watch over my shoulder in case another bus might be coming by.  As we approach the bridge, we realize that there is no walkway and the cars are flying, so we stop short at the fishing park and opt for another Uber.  Directly he shows up in his Ram pickup and we get back to the boat for only another $8.00).  At this point I’m just wondering if there is a grocery delivery service that could bring us this stuff with less time and expense, but what the hey, it’s an adventure.  We rewarded ourselves with another walk to Paisley for a great vegan meal and then returned for a well-deserved nap.  That night we attended the show “42nd Street” put on by the Cocoa Village Playhouse.  The theater was built around 1924 for the silent films and it is gorgeous.

Attended St. Mark’s Episcopal Church. Historic church by the riverfront with friendly congregants.  In the afternoon we saw that Captain Terry and Dorothy Godbold had moored at the marina.  They are gold loopers, so they’ve already been the full way around and they are going for another loop.  We had them over for docktails and really enjoyed getting to know them.

Maintenance day for me, so I cleaned out all the raw water strainers, changed the fresh water filter, and spent some quality time with Big Red while Jane did some shopping. We had to make a trip to the S. F. Travis Company hardware store.  Established in 1885, and I believe that they still have some of the original stock, it is huge and if they don’t have it, you don’t need it.  It grew into 7 buildings that are all joined.

Mack and Dolly McReynolds came over from Oviedo for lunch with us. They were both at Howey Academy with me and it was good to catch up and reconnect.  We ate at Café Margoux and it was delicious.

We introduced Mack to the Travis Hardware store and he found some needed wood stove pieces for his hunting camp. That evening Mark and Lezlie from Antonio drove their dinghy over from their anchorage across the river and we all went to Ryan’s and sat on the upper deck for dinner.

While Jane defrosted the refrigerator again, I got what I needed from Travis Hardware to replace the short shower hose from the swim platform with our 50 foot expandable hose. Of course, my fumble fingers had to let one $6.00 brass fitting drop into the water so I had to return to the store for another, but that’s just par for the course.  I did get it done and now have a fantail shower and a fresh water wash-down hose.  Jane did the laundry as I piddled about on the boat.  We spent a good bit of time planning for the next runs through St. Simons Island, Georgia.  Dinner at Thai Thai was fabulous and spicy.

Another trip to Publix – this time by bike to the Rockledge Publix on our side of the river.

After that we attended to maintenance on the boat and among other things, I worked on re-varnishing the damage to the bow rail. We checked weather for our departure tomorrow and figured for an early shove off due to the 52 miles we plan to cover to get to New Smyrna Beach.

4 thoughts on “Eau Gallie to Cocoa”