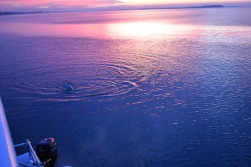 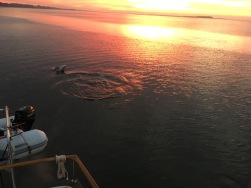 It was beautiful and perfect night on the hook at Wilson Beach but 70 miles from our anchorage to Sea Hag Marina in Steinhatchee. I figured if we got underway at 0700 we’d arrive at Sea Hag around 1630.  Sunrise was scheduled for 0730.  We were up early and so were the dolphins that seemed to enjoy playing around our boat at sunrise.

It was a bit chilly at 39 degrees so we cranked up the generator and turned on the heat.  The water to the east beckoned us with only a slight ripple.  By 0725 we were off anchor and Jane piloted while I stowed the anchor rode.  After an hour we were still enjoying the comfortable conditions with following seas of less than a foot.  Jane pointed out that the boom was swinging back and forth some, so I tightened that up.  The following seas were giving us a boost in speed.  We passed Marker R-26 at 0845 in a two foot chop.

At 0940 we realized that land was not in sight.  There was some grousing about the lack of phone service and the choppy conditions but there was nothing we could do about either.  I sighted land at 1300 off the port bow.  The chop had reduced to less than a foot.  When phone service resumed, I made an appointment to get back to the dentist in Gainesville and we set up reservations for points after Steinhatchee.  Most of those reservations we would later cancel or change.  We got passed by Chrysalis and Trust Your Cape just before entering the Steinhatchee channel at 1530.

We docked early at Sea Hag Marina at 1545 and noted that Eddy’s Weather Wag had nailed the forecast and we felt privileged to have made the crossing on what was called the best day of the winter so far.  Jane got some laundry started and we showered up.  Then we walked over to Roy’s Restaurant for dinner.  There we joined Mike and Sally from Mikey Likes It and Gil and Debbie from Chrysalis.

The tides for Suwannee were high at 1127 and low right at 1649, so I knew we would want to arrive well before 1500. It would only be a run of about 5 ½ hours so not demanding an early departure.  Freezing weather with some ice on the docks combined with copious quantities of pelican poop makes for a very slippery situation.  I didn’t go down, but I did get a scare.  On daily engine checks, I added some transmission fluid and was happy with my system to contain the extent of the mess and catch the leak.  It was a beautiful morning with crystal skies, but just too darn cold. 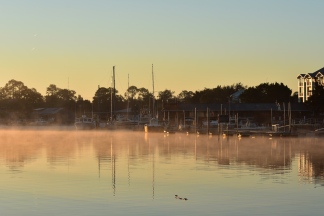 We ran the little space heater in the fly bridge to keep the shivering to a minimum.  We backed out of the slip at 0800 aided by the current.  By 0835 the sun had warmed our little roof-top solarium as we skimmed along on the calm water.  We took a course of 190 degrees from the number one marker at the end of the Steinhatchee Channel crossing Deadman Bay.  At 1200 we passed Red Bank Reef and finally entered the McGriff Pass Channel at 1229.  The porpoises greeted us as we approached the number one marker.

The Town of Suwannee

It is not a well-dredged channel and if not timed correctly, one can run aground right in the marked channel.  Of the three Suwannee River Channels, though, it is the best and most reliable.  Because of the depth issues, I continued at a slower speed. 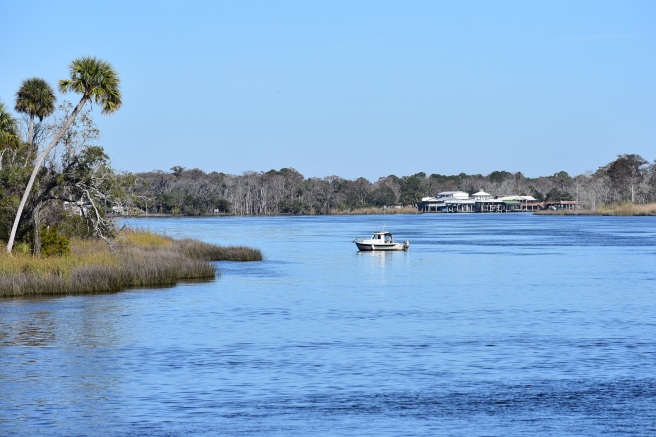 We boated into Wadley Pass at 1251 and navigated on into the Suwannee River without grounding.  Docking at Gateway Marina was a trick with the narrow fairway and almost too narrow slip, but we did it safely and tied lines at 1320.  Gateway Marina is the old Miller’s Marina and has reportedly been purchased and they are building a restaurant and bar and have other upgrades planned.  Dredging of all channels would have a positive impact on the economy of this tiny town at the mouth of the great river.  The town of Suwannee is special to me because my grandfather started the development before his death in the early 1950’s.  I’m not sure he would recognize it today.

At 1700 my cousin Carol and her husband Ben arrived to tour Sabbatical before taking us to dinner at the Salt Creek Restaurant.

She is the consummate welcome wagon of Suwannee, obviously paid for our slip and bought us dinner.  We thoroughly enjoyed our visit with them that extended after dinner at their home.

Our previous plan had included anchorages in Cedar Key and/or Crystal River, but the weather window was closing and it was time to high-tail it to Tarpon Springs. Ben had given me the low-down on the options for exiting Suwannee.  We were looking at a long day ahead of us and needed to go as early as light would allow.  Basically he said that East Pass and the Main Channel were not options and that we’d have to go back out the way we came in through the McGriff Pass Channel.  The low tide was going to occur at 0606, so I knew that there would be no way for us to get to Tarpon Springs before dark unless we left before 0400 and the Admiral squashed any plan involving predawn cruising – no room to argue.  The winds were forecast to come out of the east at only five knots before changing to SE late in the morning and SW in the afternoon.  Bay and inland waters were predicted as smooth.  That was as good a forecast as we could hope for since we had 92 miles to go.  We knew we couldn’t get out of the pass because of the low tide at 0700 or even 0800, but we needed to gain every advantage we could so I did something that most boaters would never plan on.  I planned to push the envelope and run aground on the rising tide to ensure that we’d be out of the channel at the first opportunity.  I would never do this where rocks could be involved, but it’s a mud bottom, so we left the dock at 0718 and were gifted a beautiful sunrise coming out the creek into the Suwannee River.

At 0734 we entered Wadley Pass with depths around six feet. We entered the marked channel for McGriff Pass.  At 0751 we touched bottom a little bit by marker R14 and continued on cautiously at idle speed until we found the mud engaging the bow keel at 0755 right by marker R12.  We waited five minutes and then ten and couldn’t dislodge, so I shut down the engine and we had breakfast of cereal and fruit on the fly bridge while we waited for the rising tide.  Two crabbers came by on their way out to check traps and both stopped to check on us and asked if we were ok.  They quickly understood that we were just waiting on the water.  A rising tide lifts all boats, but I only needed it to raise one.  By 0825 we were floating again and re-cranked Big Red to see if we could make it the rest of the way out.  There was no more bottom bumping and we exited the channel at 0840 knowing that we could not have gotten out one minute earlier.  We got up to speed and noted that the Navionics app was showing our arrival at well after sundown.  We were not overly concerned since we have a good spot light and the clear sky should extend twilight.  At 0850, I checked the engine and noted a small amount of coolant escaping from the radiator cap.  At 0900 we checked with our friend Herb Seaton (Phanthom) who is the AGLCA Harbor Host for Tarpon Springs.  He assured us that the channel in is well marked and that there is lots of ambient light to make an after-dark approach in unfamiliar waters very doable as long as we understand reading the chart and following the markers.  I think we’ve got that down by now.  Jane checked in by phone with Turtle Cove Marina and got our slip assignment and Adrianna said she’d leave a packet hanging on our power pedestal.    At 1000 we were just off of Cedar Key and looking for any fishing boats that I might know around Sea Horse Reef.  By 1220 we were about 25 miles west of Crystal River.  The water was calm and the cruising pleasant even though there was no land in sight other than the power plant. 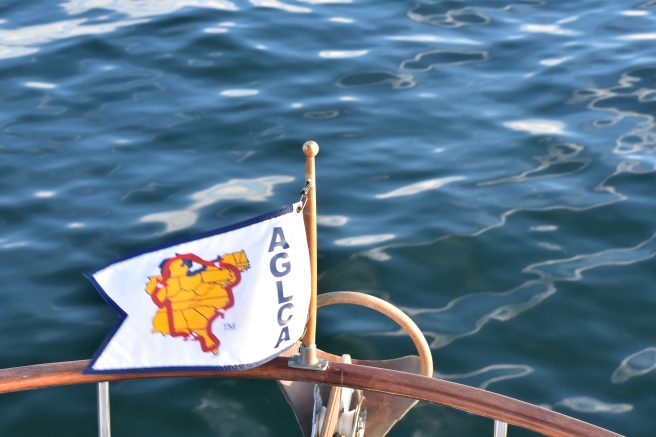 By 1400 the water was changing to clear green and we spotted a turtle.   At 1615 we sighted land again. Jane noticed that cell service returned about 30 minutes later and started calling to change reservations at multiple marinas.  The long day cruising was tiring, but we were treated often to porpoises and then a beautiful sunset.

Jane manned the spot light as we entered the channel of the Tarpon River.  We docked bow in without a problem in slip 21 at Turtle Cove Marina.  We took a few minutes to clean up a bit and then walked up to Costa’s Restaurant to join a large group of other Loopers for dinner.

While we were in Tarpon Springs, we rode the Jolley Trolley and had lunch at Crabby’s on Clearwater Beach with the crew from Magic and Chrysalis.  We did some walking for exercise and enjoyed other Loopers at Docktails at the Tiki Hut.  We worshiped at St Nicholas Greek Orthodox Church.  The weather deteriorated with cold and wind and we relished residing in port and knowing we arrived at the point where we can cruise the Intracoastal instead of open unprotected water.  We rented a car and drove to Gainesville for my dental appointment (finally fixed with permanent crown).  While we were there, we enjoyed a lunch with our daughter and the grandsons, but returned to Sabbatical the same day.