We left the Brockville dock at 0755 backing into the narrow fairway until I met the intersecting fairway that served the double row of slips. Three or four turns of up and back and I had her spun around to exit the marina.  Thrusters are for sissies.  We were on our way to Crysler Park.  We had some rain earlier and expected more in the afternoon, but it was sunny for the time.   We should get up to the marina at Crysler Park by 13:40.  By 0850 we were hitting 9.5 miles per hour merrily sliding along with the abundant current of the Saint Lawrence River.  Clouds began to close in but the current still was pushing and at 0940 we were making 12 mph over ground.  We arrived at the Iroquois Lock and found out that the online payment did not get to the right place and we had to cough up another $30.  Must remember to seek a refund.  At 1210, under cloudy skies, we glided through the marina entrance docked ourselves into a slip.  It’s a remote place without the amenities of any other commercial development around.  We’re fine with just dining aboard and moving on again in the morning.  The rain continued and got a little worse.  After it let off some, we moseyed over to the bathrooms for showers after watching the cruise line come in.  It looks like the size of boat that might have about 20 couples on board.

We slipped out of Crysler Park Marina at 0945 headed for Valleyfield. It is 54.6 miles down-river (Northeast) on the Saint Lawrence and we will have to negotiate two locks, the Eisenhower and the Snell.  These are United States locks.  The skies are fully of puffy clouds and there’s a snap in the air with the temp at 62 degrees.  Jane found the floating bollard in the Eisenhower Lock a breeze as we were lowered and continued on at 1145.  We had another nice locking experience at the Snell Lock with a bunch of ex-navy guys handling the operation.  At 1247 we zipped along at the break-neck speed of 13.3 mph!  Without help from marina staff, and in spite of a firm breeze, we docked like pros into slip number 1207 at Marina Valleyfield around 1630.   When we checked in, it was obvious that we are in the land of the Francophones. It’s like being in a foreign country.  Ok, well, it is a foreign country.  By the marina, Valleyfield is preparing grandstands for the hydrofoil races.  I was glad to find out they won’t be running first thing in the morning.  We got organized and then set out with the trusty grocery cart for the hike to the SAQ (must be French for adult beverage store) and the Metro Grocery.  They were together in a plaza just over a mile away and the day had heated up.  I was thankful for the air conditioning when we arrived.  We stocked up and took a different route back through a residential section of modest homes and apartments. 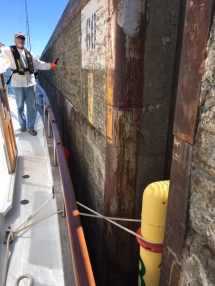 We took our sweet time getting ready to leave. I added a quart of oil during the engine checks and I refilled our fresh water tanks.  After careful consideration of the brisk wind and the proximity of the nearby wall at the end of the fairway, we backed out sans dockhand at 1130. I had my hands full bringing her around to port quickly in a three point turn before the breeze got us against the end wall.  It was accomplished without contact, super-goosing in forward, but not without some nervousness.  Jane gave me high praise on the handling.  At 1153 we were back in the St Lawrence and arrived at the Pont de Valleyfield (lift bridge) at 1210.  The next opening would be at 1300, so we took turns “treading water” and reading.  We passed through the Pont de Valleyfield at 1313 and arrived early at 1340 for the 1400 opening of the Pont de Saint Louis.  There is not as much traffic here and the tender opened early for us at 1345.  At 1420 we were tied to the pleasure craft dock at the Beauharnois Lock (#4) waiting for a “beeg sheep” to lock through.  By 1512 it was moving out of the lock, but these guys move so slowly that we couldn’t enter the lock for another 15 minutes.  The Canadian guys assisting in the lock were very helpful and fun to talk with.  I found out the ships are paying between $30,000 and $100,000 per lock compared to our fee of $30.  And that is really only $23 when you consider the exchange rate right now.  We exited lock 4 and by 1610 had made it through Lock 3 and entered Lak de Saint Louis with a view of Montreal in the background.  We found anchorage near the Kahnewake Marina in eight feet of water and settled in for the night at 1733. The evening lasted for quite a while as the sun seemed like it wasn’t ready to set. We enjoyed our spot from the fly bridge until after dark. 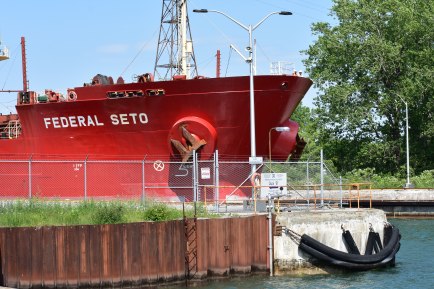 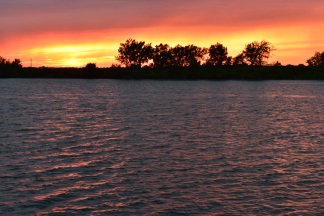 The good news – bad news of the anchorage was that it was good holding in mud but that mud came up with the chain and anchor and I had to get out the wash-down hose to keep the gooey stuff off the deck. We were underway at 1045 bound for the Yacht Club of Montreal under sunny skies in 60 degrees.  It is only 21 miles so we expected to arrive mid-day.  Alas, it was not to be.  The commercial traffic having priority over pleasure craft contributed to a long and slow day.  We arrived at Saint Catherine Lock at 1142 and bought tickets for the passage for both it and St. Lambert Lock.  These are both run by the St. Lawrence Seaway Management Corporation which is contracted to the Canadian government.  They do an excellent job, but the lock masters do not reply to marine radio when hailed.  We had to tie up at the floating dock provided for pleasure craft and then go up to the phone booth to buy tickets from the vending machine (it does take credit cards) and then pick up the receiver from the phone in the yellow box to ask for lockage down.  I was informed that there would be a delay before we could enter the lock due to commercial vessel already in the lock.  We sat at the dock reading.  At 1215 we heard over the loudspeaker system to get ready to proceed for lockage.  That was a false alarm and meant for four recreational boats that were up-bound.  At 1245 we were back at the dock after being waved off and hollered at by the workers.  I returned to the yellow box phone for further information.  The lockmaster was very friendly and understood our confusion.  He said that after they recreational boats come out, there would be one container ship locking down and then it would be our turn.  The small boats came out and there was no ship in view.  At this point, I’m getting antsy, but know there is nothing I can do.  Finally at 1320 the ship comes into view.  It is very slow.  At 1440 I called again for an update only to learn that there is another ship coming.  These guys move in and out of the locks with all the rapidity of snails.  It’s amazing anything ever gets anywhere.  Finally, at 1634 we were let down (literally) 40 feet and coming out of the St. Catherine Lock.  Five hours for one lock and another to go and I began to wonder if we would arrive at the YCM before they closed.  Jane put in a call and learned that they would be there with staff until 9:00 PM.  At 1745 we were waiting at the St. Lambert Lock with two ships ahead of us and a private vessel coming up.  The drop down was 18 feet and we were out by 1925 and headed for the short run north before turning back sharp around the north point of Ile St. Helene.  This put us going against the full force of the St. Lawrence.  It was running at four and a half knots so that cut our speed to less than half.  The locals that rafted with us on as we were locked down had advised that we keep as close to the island as depth would allow avoiding the swiftest current.  It got shallow nearer the bridge and from that point I made a beeline for the entrance to the Yacht Club.  When we got there, I looked back at the cookie crumb trail on my GPS and realized that it was no beeline.  The track would best be described as serpentine.  A 4 ½ knot current is pretty much raging.  The young and capable dockhand, Lambert, was there to help with our lines when we finally secured at 2015.   YCM is an excellent facility and we did laundry and showered (they even provide towels here!) before turning in.

Docked at the Yacht Club of Montreal.