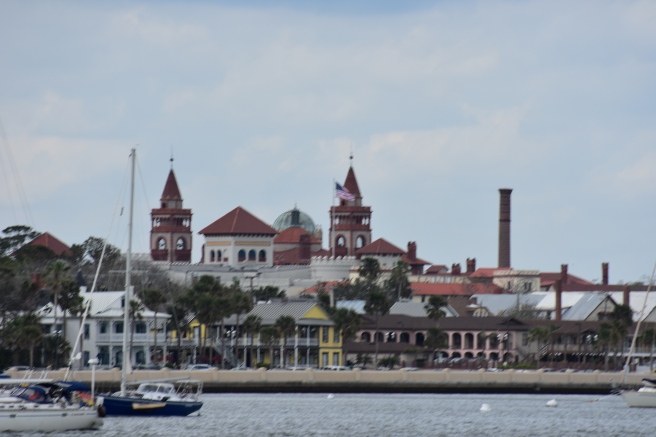 Jane took a long walk after breakfast while I worked on the last blog post. She explored downtown and enjoyed seeing Travis’s former house on Mulvey.  We had fond memories of painting and moving him in to that 3rd floor fire hazard for his senior year at Flagler College in 2009.  It was really a cute spot and great location.  Meredith and grandson Evan arrived in the mid afternoon and then went off to pick up her friend, Staci and family, flying in on a private plane.  Must be nice to be married to a pilot.  Jane and I walked over the Bridge of Lions and decided to check out Marker 8 motel and marina.  This was the old Anchorage and it has been totally redone.  We got info on docking there and walked back just as the sun set. 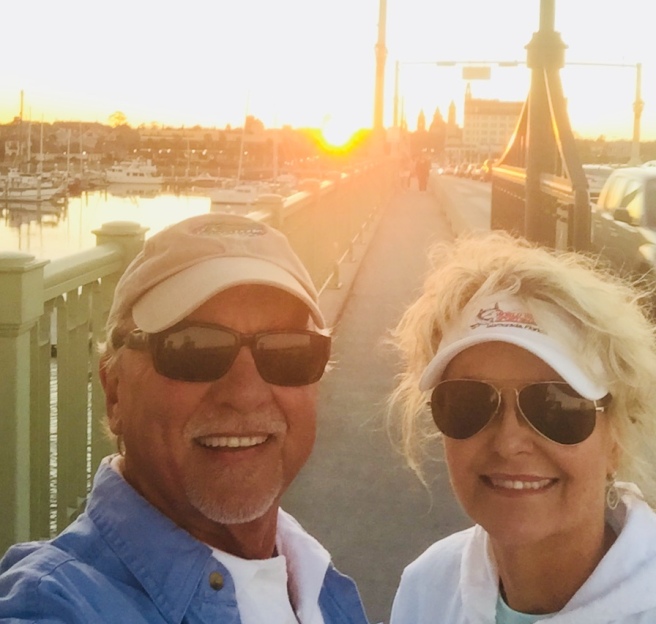 It was a little chilly, so we finally used up 3 cans of the soup that we had aboard and played Jenga. Thanks to Garrett Bell for the games.  When a wake hits the boat, it’s all just part of the game. 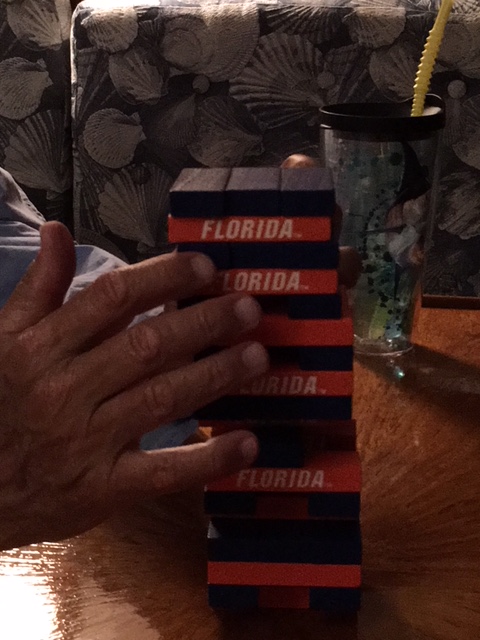 Meredith was staying at the Hampton Inn out at the beach, but came and took Jane to Publix at Vilano for provisions. Not the best Publix but they do carry wine.  Jason showed up in the late morning and on board we watched the Gators whip Kentucky on TV via our HD Mohu antenna.  (When it works, it’s great.)  Watching the TV with the horizon waving (it was really rough in the bay with lots of wind and current) in the background  caused a slight motion sickness for Jason so instead of sleeping on the boat with us that night as planned, he spent the night with his friend, Steve,  who lives on the golf course at St Johns. Jason drove us over to the Hampton Inn to hang with Meredith et al around the pool at the Hampton Inn.

There were some college students on spring break there that needed some counseling on life so I regaled them with some yarns and advice.

Evan and Kenzie played Jenga with GJ and walked on the beach to show her the hole they dug that was heading to China.

After catching a ride back to the marina, we walked over to the Floridian Restaurant (Southern comfort food) for dinner.  We ate at the bar upstairs and it was incredible.  I got Tofu and Grits.  Might not sound right to you, but I loved it.

More grits. Yes, we like grits. And then off to Memorial Presbyterian for service at 1100.  It is a beautiful old church and the final resting place of Henry Flagler.

After church we met Jason, Meredith, and Evan along with Staci’s family for lunch at the Conch House. Then we all came back over to the boat.  Evan loved showing off “his” boat to Kenzie.

After a short nap we hosted Mike and Carol Oyenarte along with Lyla and Whit Springfield for docktails.  They brought beautiful platters of appetizers!  Who needed dinner after all that?  We all had a great time! 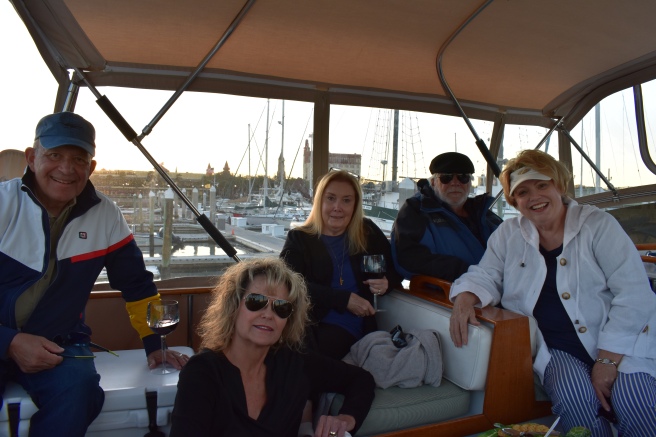 I changed Big Red’s oil and filter. The previous owner, Tim O’Neill, set up a handy tube connected to the oil pan drain plug hole to which I could attach the pick-up tube from the changing pump.  It is then an easy and clean process to pump the old oil into the saved jugs from the previous change and then get them to the used oil bin on shore for proper disposal. 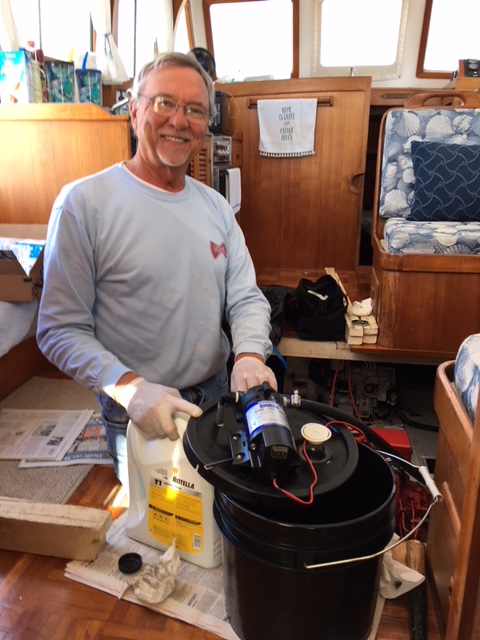 Then I replaced the pencil zinc and replenished the batteries with distilled water.  It requires some real engine room yoga to get the batteries serviced.  Afterwards, we rode our bikes to Target to pick up a few things.  We called our grandson, Jake, to wish him a happy 16th birthday.   We failed to send the requisite $5 bill in a card, but I bet he’s gonna love having Jane’s old Yukon instead.  A safe car for a teenager and it’s neat it previously belonged to his great granddaddy.

Enterprise picked us up and we took a rental car to Gainesville for a quick trip. We both got our hair did, took our dog to the vet and I was able get by the hospital to visit Annette who is like a second mother to me.  Got takeout from Grill Fresh which is located in the old Everyday Gourmet next to Café Gardens. Wonder if any business will ever make it there. Oh well. I also got a chance to stop by the office and see some of my old real estate cohorts.  It was good to hear that I look “rested and relaxed”.  I didn’t imagine that I would actually miss working, but I really do miss the team interaction with Tracy, Todd, Beau and Dean.  After picking up some stuff at the house, we hustled on back to St. A and greeted Scoot and Debbie Gallagher along with Chip and Mary Ann Williams aboard for drinks before walking over to O.C. Whites for dinner.  It was a great visit with fun friends.

Got up early to return the rental car.   Met other mariners here that were also returning their car so Enterprise could return both of us to the marina with one trip.  Jane did laundry in the morning and then our old boating buddies, Larry and Linda Awbrey, arrived.  It was fun showing them around the boat.   We hung out on the boat for a while and then sauntered over to A1A Ale House for lunch.

After the Awbreys left it was nap time for us.  Sometimes, one just feels tired without having really done much.  For dinner, Jane created another masterpiece salad from our Tuesday lunch leftovers.  We enjoyed reading in the evening and I finished Dan Brown’s Origin.  That was tough to put down.  Unlike this blog, it’s a real page-flipper.

Cold again this morning and we turned on the heater for a while. We spent a couple of hours planning possible stops between here and Norfolk.  My brother, Mike, and his wife Cam drove over to meet us for lunch and brought along their daughter, Kelly .  We met up at O.C. Whites and dined upstairs in cozy warmth.  Mike brought us a loaf of his home-baked sourdough bread.  It was great to see them, but I neglected to take any pictures.  Where is my brain?  After they left we decided to walk over to Castillo de San Marcos.  Construction began on the fort in 1672 and today it looks very much like it would have when completed in 1756.  The Castillo is a National Monument so we could use our National Parks Senior Pass for free admission.  I always enjoy visiting the old fort and (avoiding the tour groups of school kids) and we took our time to read all the historical placards.

After a little happy hour back aboard Sabbatical we thought we should check out Captain John’s favorite restaurant in St. Augustine, so we set off on our bikes bundled up against the cold bound for Hurricane Patty’s.  It was less than a fifteen minute ride from the marina and we gobbled up some good grub.  Hurricane Patty’s is a casual island-inspired, waterfront seafood spot on the San Sebastian River.  We were happy with a booth inside since it was so cold and getting dark by the time we arrived.  Those headlamps certainly came in handy for the ride back in the dark, especially after enjoying some wine.  No BUI this visit.